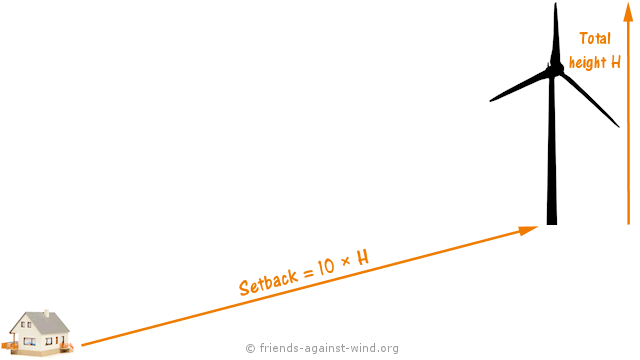 ENGLAND, WALES
No regulations. I suppose the courts would enforce the laws on noise levels, but the experts invariably seem to show up on days with little wind, and of course never at night. In a court case, the previous owners of a house were condemned to compensate the buyers because they had not disclosed the windfarm project affecting the house: “District Judge Buckley decided that this amounted to ‘material misrepresentation’ and ordered the Holdings to pay compensation of 20 per cent of the market value of the house in 1997, £12,500, plus interest, because of damage to visual amenity, noise pollution and the ‘irritating flickering’ caused by the sun going down behind the moving blades of the turbines 550 metres [1,804 ft] from the house.” John Etherington says: “There have been permissions as close as 350 m [1,148 ft] I think.”

FRANCE
On a case-by-case basis, only limited by noise legislation. The French Academy of Medicine recommends 1,500 m (4,921 ft). This is not respected, however. In practice, 500 m (1,640 ft) seems to be the minimum observed.

GERMANY
Different setbacks apply according to the noise level protection of the area :

All makes and models of wind turbines are not equally noisy, hence the lack of a precise distance. Some states have standards of their own.

NETHERLANDS
In practice, they use 4 × the height of the mast of the wind turbine. This is not a legal setback. The legal setback is linked to a maximum noise level [40 dB(A)]. New limits are proposed and in discussion at this time and a possible change of setbacks is expected to become law in the middle of this year (2009).

NORTHERN IRELAND
The “Best Practice Guidance to Planning Policy Statement 18 ‘Renewable Energy’” (August 2009) states: “As a matter of best practice for wind farm development, the Department [of the Environment] will generally apply a separation distance of 10 times rotor diameter to occupied property (with a minimum distance of not less than 500m).”

ROMANIA
The setback is 3 × the height of the mast, and this distance may be shortened with the approval of local communities but not shorter than height of the tower + length of blades + 3 meters. So far, this appears to be the European record on the nuisance scale.

SCOTLAND
On a case-by-case basis within 2 km of the edge of cities, towns, and villages (SSP6 legislation). Some people skim this and interpret it as a 2 km setback. It is nothing of the sort. The policy was adopted after the vast majority of wind proposals were submitted so does not apply to them. Another caveat: note that “cities, towns, and villages” in practice suggests probably a minimum of 3,000 or more homes. Isolated country houses, in any event, are excluded from this. Some examples:

Addendum, April 18, 2009:  The Stop Highland Windfarms Campaign wrote to Jim Mather, Minister for Enterprise, Energy and Tourism, for clarification. In reply, the Directorate for the Built Environment wrote: “The 2km separation distance is intended to recognise that, in relation to local communities, visual impacts are likely to be a prominent feature and this should be taken into account when identifying the most suitable search areas. However, impacts will clearly vary considerably depending on the scale of projects and the proposed location. That is why SPP6 confirms that, in all instances, proposals should not be permitted if they would have a significant long term detrimental impact on the amenity of people living nearby. This principle applies to houses within and outwith 2km of the proposed development and regardless of whether they are single dwellings or part of a settlement.” Click here for a copy of the correspondence in full, by courtesy of the Caithness Windfarm Information Forum.

SWITZERLAND
Documentation from Suisse Eole (quango promoting windfarms) mentions 300 m (984 ft) from the tip of turbine blades of a 70 m (230 ft) turbine. But each canton is still working on a clear setback policy.

See also:  “Safe setbacks: How far should wind turbines be from homes?”

This article is the work of the author(s) indicated. Any opinions expressed in it are not necessarily those of National Wind Watch.

Information provided by EPAW members and summarized by Mark Duchamp

Note from the NWW editor:  These are not necessarily good examples. For information about noise and health impacts that require a setback from homes of at least 2 kilometers (1-1/4 mile), see the NWW Noise & Health page.